Since its inception, Formula Student has been an education competition associated with motorsport. Our team, as well as hundreds of other teams around the world, present not only their year-round development of a single-seat electric-powered formula, but also project management of the team and other engineering skills associated with the project. We usually get feedback at summer races. Several conferences are held throughout Europe throughout the year to develop the knowledge and skills of Formula Student team members.

Last weekend, several eForce team members attended the Formula Student Symposium at Széchenyi István University in Györ, Hungary, where many automotive experts presented their advice on racing car design and other Formula Student topics. During the three days, the participants had the opportunity to gain new knowledge at lectures, workshops and personal discussions. 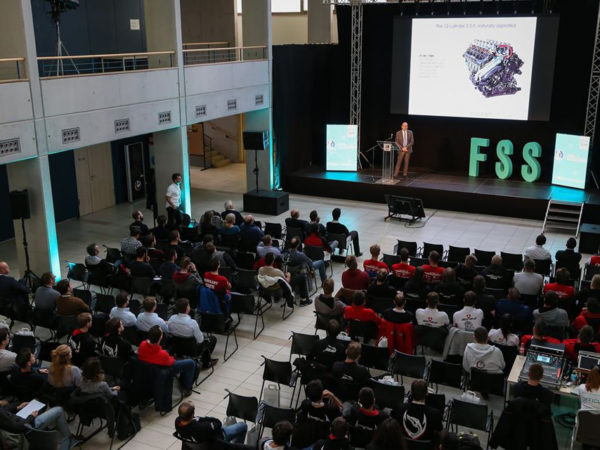 Petr Hainc, a member of the electrical engineering group, evaluated the eForce members:

The conference program was divided into blocks of lectures common to all participants, covering topics ranging from general tips for Formula Student teams to project management issues to narrowly specialized topics such as autonomous management. Furthermore, each of us could choose 3 technical workshops according to their focus and interest. Our team members visited for example chassis and tire selection seminars, composite monococs design, racing car dynamics or safety in autonomous driving. At the end of Saturday's day there was a dinner with informal chat with the lecturers or exchange of experience with members of foreign FS teams. Among the personalities we have had the honor to meet, we can name Formula 1 experts such as Luca Marmorini, Owen Carless or experienced matador design jurors at FS Pat Clarke, Claude Rouelle.

In the busy weekend program we found a moment to explore the beautiful historic town of Györ. The event was attended by 230 students from 8 countries in Europe. Overall, we rate the FS Symposium very positively and thank the organizers for the opportunity to spend the weekend with great people in the nice environment of the local university. We will certainly use the newly acquired knowledge to build our formulas. We are already looking forward to the next years.