The days from August 23 to 28 were dedicated to the last race of the season, which took place at the ST Raus racing circuit in the Croatian city of Novi Marof. Although we were here last year, these races were still a big challenge for us, because the Alpe Adria competition was declared an official Formula Student race for the first time this year. Another reason was the growing fatigue of the team members, caused by all the previous races, which were always separated by only a small time gap.

On Tuesday morning, we left the Faculty of Electrical Engineering for the Croatian circuit in three vans. The journey ahead of us was less than 700 km and was covered without major problems in about eight hours. After arriving at our desired area, we registered, set up camp, prepared the pit for the next day and witnessed the opening ceremony hosted by the event organizers.

Wednesday was dedicated to the scrutineering, for which the team and the car were prepared, mainly thanks to the completion of the previous scrutineering at the prestigious races in Germany, which ensured the almost perfect condition of the car. The first test we had to go through was checking the battery. Thanks to our experienced electrical engineers, we passed this test first time. The mechanical inspection was similarly successful, however, there was a minor problem that caused us to fail acceptance on the first try. However, this problem was not that critical, so we went for the LV - low voltage inspection, which we again passed on the first try. 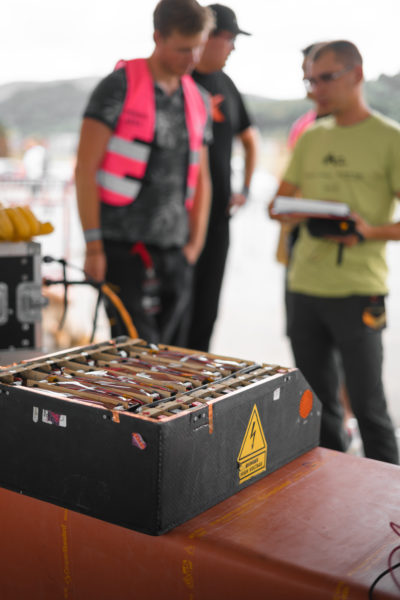 On Thursday morning, we passed the mechanical inspection just as well as the HV - high voltage inspection. The car could then go on three more tests. The first was the Tilt Test, i.e. tilting the car by 60° and checking whether there is any liquid leaking somewhere. The second stress test for the car was the Rain Test, where the car was exposed to simulated rain for two minutes while switched on. After the rain stopped, the same amount of time was waited to verify the durability after the rain. The last test was the Brake Test, the task of which was to check emergency braking. There were a few problems here, but after four attempts this test was also passed. From this moment on, the car was ready for dynamic disciplines.

Friday was the most burdensome day, as there were many tasks that we had to complete. Pilot and media briefings took place in the morning, followed by a walk of the pilots along the track so that they could map out the individual sections of the track. As soon as the pilots returned, we prepared the car for the first dynamic test called Acceleration. This 75 meter long straight track was crossed in record time on the first attempt. Only 3.42 seconds were enough to reach the finish line. Despite the fact that this time was almost the best of all the teams, we achieved an even better time of 3.41, which placed us close in second place - 3ms was the difference. At the same time, the first problems with the energy meter appeared here. The next discipline was Skidpad. Our pilots made four attempts, after which we were told that none of them might count, due to not receiving data from the energy meter. The reason for the recording outages was the inability to get power from our low voltage circuit. We didn't know exactly where the problem was. Skidpad's last attempt the energy meter worked, but there was a brake fluid leak that caused the time to not be recognized. We were so worried that we wouldn't have a single recognized attempt. Fortunately, thanks to our experienced members and excellent cooperation with the organizers, we found a solution that ensured the recognition of the previous attempts. After the dynamic disciplines, the static disciplines awaited us. The Cost & Manufacturing discipline was presented in formal clothes, tidy and prepared pit. This was followed by the EDE discipline – an engineering design event in which, divided into small groups, we presented how sophisticated each part of our car is and stated the reasons why these solutions were chosen. On Saturday morning, the pilots were waiting for another passage of the track. This time they set their sights on the autocross track, which represents one round of the Endurance race. Our electrical technicians devoted the rest of the day to finding the cause of the unreliable energy meter. The reason why the power meter did not work as it should was due to poor filtering of the supply current, which was supplemented by induced electromagnetic interference created by the inverters. We were thus faced with the task of providing better EMC shielding, after the implementation of which the interference was eliminated. With a functional energy meter, we were able to participate in the autocross, in which we placed fourth. In the evening, we took the car and together with the other teams went to the track in order to take photos of all the teams, the organizers and also to create a joint photo with our colleagues from CTU CarTech.

Sunday was marked by Endurance – the biggest race of the entire competition. From the morning everyone in the team was nervous because everyone knew that this race could change everything. We wanted to make sure that the car and the drivers were in top condition, so we did a lot of testing. With this knowledge, the car was taken to the queue. 25 rounds were waiting for our pilots. One after the other was gradually conquered until the successful finish in 25:52, which was the best time among the electric formulas. After the celebration of this success, there was a feedback of the static disciplines. With this, we finished the formula and pit was no longer needed, so we packed the workshop back into the cars. In the evening, the final ceremony took place, where the winners were announced. A remarkable event that is difficult to describe in words. Second place overall!

On Monday morning, the drive home was started by packing our camper into the vans. After that, we set off on our way back and after eight hours we successfully arrived at the Faculty of Electrical Engineering. Finally, we unpacked things in the workshop, knowing that the time for regeneration had well-deservedly arrived.