Thinking outside the [box]: how does an autonomous formula work?

Thinking outside the [box]: how does an autonomous formula work?

In the autumn of 2020, students from the eForce FEE Prague Formula team from the Czech Technical University presented the very first Czech autonomous formula. Currently, they are the only Czech team participating in the Formula Student competition in the Driverless category, one of the most prestigious autonomous car competitions, which was established in 2017.

The topic of autonomous and electric vehicles is increasingly used in the media. The world's carmakers are abandoning the development of "classic" diesel and gasoline engines, and electric cars are slowly becoming mainstream. Technologies such as automatic braking, lane keeping, or various self-steering systems appear in the car equipment, which, with the use of robotics and artificial intelligence, increase traffic safety and reduce the risk of accidents. With their level, these assistance systems often approach autonomous management, and their further development and implementation is often hindered only by unresolved legislation and skepticism.

Students have a great advantage in developing their racing autonomous formulas. The Formula Student competition has very clear rules regarding not only the design but also the safety. They do not have to solve legislative problems on the race track. Enthusiastic university students thus bring many innovations to the field of autonomous cars, and their machines arouse great public admiration. The great media interest was accompanied by the presentation of the first DV.01 monopost from the eForce workshop. Monopost DV.01 is based on the successful electric formula FSE.07, which has won an absolute victory at the domestic races of FS Czech in Most. The implementation of autonomous control into the originally piloted formula required a large amount of modern electronics and demanding software development. The state-of-the-art technologies available in the self-driving formula are very expensive. EForce members can only work with them with the support of the university and companies that significantly support students. The company is also an important partner VM Engineering with the motto Thinking outside the [box], which deals with, among other things, i machine vision in the form of eg implementation of camera systems and sensors for industrial solutions. 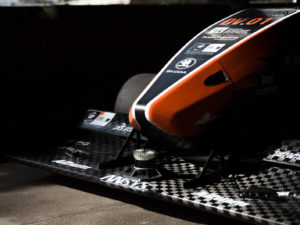 Cameras and smart sensors it also uses our formulas. It is controlled by computationally intensive algorithms that evaluate data from cameras and navigation systems. The navigation system itself consists of three elements. The movement and position of the vehicle is sensed using an inertial navigation system, which is a device using GPS, an accelerometer and a set of gyroscopes. The space around the formula is captured by several stereo cameras, which are cameras that provide a depth channel in addition to the color image. The third party is the LiDAR sensor, which can determine the distance of surrounding objects relatively accurately using the reflection of laser beams. The algorithms then process the data from the navigation systems and evaluate them using artificial intelligence and neural networks. The resulting information is then sent to the steering wheel, which controls the formula itself. The Nvidia Jetson Xavier on-board computer takes care of the fast processing of neural networks. He is responsible for calculating not only the trajectory itself, but also the ideal engine power or front wheel rotation. All this is calculated by the so-called Stanley algorithm, which, for example, optimizes the passage through the curve so that the formula does not skid and maintain the highest possible speed.

Autonomous formulas on racing circuits are still far from reaching the same speeds as their human-piloted siblings. Nevertheless, the results achieved are a great promise for the coming years. The question is how long it will take to optimize algorithms and computing power so that they can run on the track at the same speed. However, the idea of ​​the Formula Student competition remains the same - to involve students in practice and allow them to try working with modern technologies in solving complex engineering problems.