Racing in the scorching heat of Italy

Racing in the scorching heat of Italy

The first races of the year for the autonomous formula took place in Italy at the Autodromo Riccardo Paletti circuit in the city of Varano de' Melegari in the province of Parma from 13.7. until 17.7. These races were a big challenge for us for several reasons. The first was the fact that this is our first race of the year, for most of the members the first race ever and they were not 100% prepared for what it means to be part of a Formula Student race. The second challenge we faced was the fact that at the same time as the races in Italy, there were also races in Switzerland where our piloted electric formula went. So we had to deal with the distribution of material, equipment and, above all, people between the two plants.

We left for Italy from our workshop at the Faculty of Electrical Engineering in the early hours of Tuesday. The road ahead of us was less than 1000 km long and we did not encounter any major problems. After 12 hours of travel, we were able to set up camp and prepare for the first day of racing. Wednesday morning we registered and started building the pit. Everything was very organized and led by a few more experienced members, it was hard to tell that most of the members were doing it for the first time. After setting up the pit, we started to prepare the car for the tests, the first thing that awaited us was the test of the battery. This inspection here takes place differently than we are used to. Thanks to sufficiently prepared documentation for our accumulator, we did not have to show its internal part. So we passed the inspection without a problem. Next up was the acceptance of the car's low-voltage systems (so-called Electrical 1). We didn't manage to finish Electrical 1 in time, but we managed to get about 80% through.

On Thursday morning, we were the first to line up for the acceptance of Electrics 1. We knew that this day we had to handle all the acceptances in order to be able to handle all the dynamics without great stress. Electrics 1 was thus completed very quickly and it was possible to switch to the car's high-voltage systems (Electrics 2). This scrutineering was managed without any major problems even before the lunch break and we could go to check the mechanical rules. Unfortunately, we didn't have time to finish here before lunch, but the positive news was that we didn't find any problems and we could continue in the afternoon. After the successful completion of the mechanical acceptance, we set out for the egress test. The egress test is a test of the pilot assessing whether he can jump out of the car in an emergency within five seconds. This was not a problem for us and we were able to go on the significantly shorter acceptance tests, namely the tilt test and rain test. The tilt test is an acceptance test in which the tilting formula is tilted up to an angle of 60°, while it must not be tipped or spilled. The next test that awaited us was the rain test, during which the formula's resistance to rain is tested. For every electrician, this acceptance is a nightmare, constant doubts about whether he has made a mistake somewhere. But it turned out that we didn't make any mistakes and we passed this inspection without a problem. The last item on the agenda was the takeover of autonomous systems. There were no problems here either and we were able to continue. 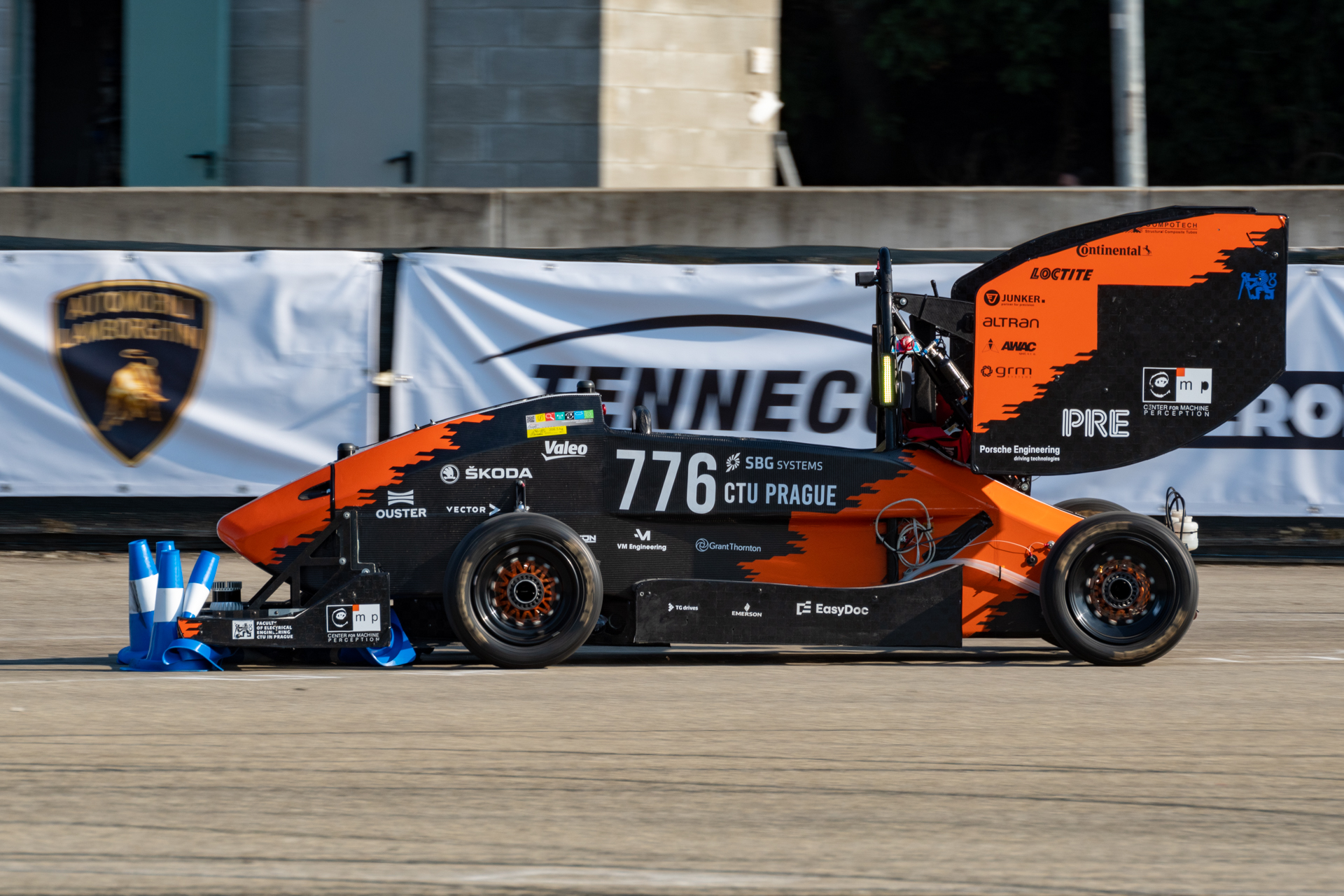 Friday was the most demanding day for us, in the morning we had to pass the brake test with the pilot, then the test of the autonomous braking system, in the afternoon the static disciplines Engineering Design Event (EDE), Cost report followed, and in the afternoon the first two dynamic disciplines came. At the brake test, we were the first team ever and managed to pass this test on the second attempt. We passed the autonomous brake test on the first try and could start preparing for the EDE. For us, this primarily meant changing from work clothes to more formal clothes. Here, each of us presented our area of ​​development on the car for an hour. It was clear that the judges liked our work and explanation and it was reflected in the result with a beautiful third place in this category. Before charging the battery for the dynamic disciplines, it was still necessary to go through a minor acceptance of the charger, which the scrutineer finished with the words "Perfecto" and it could start charging. In the meantime, the other part of the team presented the Cost Report and despite the fact that they did it for the very first time, they got a wonderful 83,5 points out of 100. After a lunch break, we went to the dynamic disciplines. The first thing on the agenda was acceleration, which only 3 teams took part in. We, FS Talinn from Estonia and the combustion team from Naples. Our best attempt was 8,2 and we placed 3rd. This was followed by a discipline called Skidpad, in which not a single team, including us, managed to make a valid attempt.

On Saturday, our program was noticeably calmer. Only one dynamic AutoCross discipline awaited us. This is a ride on an unknown track. Again, only the same three teams as the previous day entered. Everyone managed to finish AutoX. We even finished it as second, but unfortunately we knocked down too many cones and with penalties we ended up third. Even so, it was a success for us that we were able to successfully complete another dynamic discipline. The Sunday program was much more challenging for us. The first thing on the agenda was packing up the campsite and pit, as we had to leave for the home races in Most in the evening after the announcement of the results. Already in field conditions, we started preparing the car for the climax of the competition, namely the Trackdrive discipline. Trackdrive is a discipline in which you need to drive 10 laps along an unknown track. The problem with this discipline is that the car sometimes hits a cone and it is not possible to reliably detect it afterwards. A total of 6 teams took part here, and yet we managed to finish the race in a great 2nd place and beat everyone except FS Tallinn, who also dominated the Italian races with this performance. After completing the Trackdrive, we packed the rest of the things, including the formula for the crossing to the Czech Republic, and I set out to announce the results. After the beautiful closing ceremony, we had nothing left but a 12-hour journey to Most for the next races. 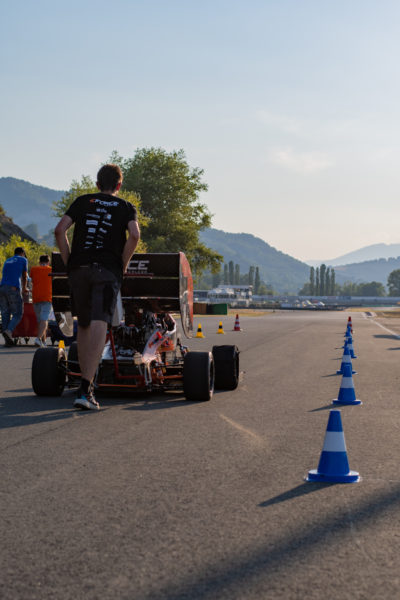